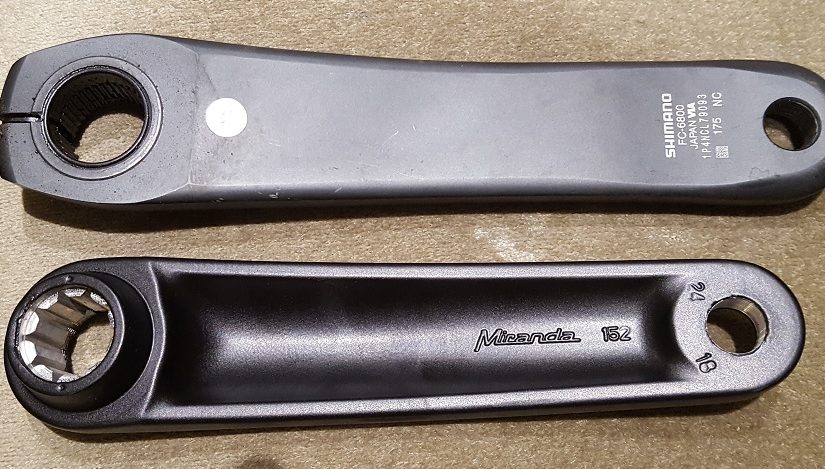 A quick Google search and you’ll easily find loads of information, history and advice regarding crank length for bicycles.  A summary of where things stand today is that most adult bikes sold, tend to come with cranks between 170mm and 175mm in length.
Shorter cranks give you:

For the purposes of normal human-only powered cycling, if you go too far in either direction from the 170-175mm length, the compromises generally become too great and you end up with something undesirable.

This theory, along with most other long tried and tested bicycle-applied theories, has been carried over to pedal assist eBikes.  In the short term this is necessary, simply to get things to market – it works, why change it?  But as we start to look more and more into new eBike specific technologies, products and ideas, it’s worth questioning pretty much everything and that certainly should include telemetries, ergonomics and bicycle geometry.  The long chain stay debate is another of these and covered in a previous blog entry here.

So how might different length cranks benefit eBikes?  Well, firstly some of the problems caused by 175mm cranks are noticeably worse on eBikes; but also some of the downsides of shortening the cranks are much less of an issue on eBikes.

The biggest benefit of short cranks for off road eBike use is ground clearance.  Going uphill over rough terrain on a full suspension eBikes is really where they can shine the most – but due to the nature and legality of pedal assist eBikes, in order to get the power, the cranks have to be turning.  Anyone who’s ridden a full suspension eBike over rough terrain will know that pedal strikes are common – and it can be more than mildly annoying, it really can lead to broken/bent components or worse – injuries.  To compound matters, the bigger the eBike’s rear suspension travel, the worse the problem gets as it allows the bottom bracket a lower potential height from the ground when the suspension compresses.  Early remedies to this problem seemed to be either raise the bottom bracket height – which has terrible consequences on the bikes handling in other situations; or fit rear shocks with super hard climb settings on the damper dials – again not ideal as this basically makes the suspension stop working.

So why not shorten the cranks?  Well the usual logic is that this requires a big increase in pedalling torque, but with eBikes – not so, because the vast majority of power and torque are delivered by the motor, not your legs.  So how short to go?  Well the test options are fairly limited as to what’s available.  The shortest currently-available adult crank length is 160mm.  That’s enough to make a significant difference, but you can actually go slightly further by fitting kid’s bike cranks which go as short as 152mm and still have normal fittings for the crank centre axle and pedal thread – ie they bolt straight on without modification.

So I’ve been riding 152mm kids cranks on a 160mm travel full suspension eBike for a whole year now and I’m happy to report that its simply better and with only minor compromise.  No more pedal strikes and the bike can happily be pedalled over much more bumpy terrain.  I say “with only minor compromise”, but to be honest there are a couple of minor points I should add.  Firstly, super short cranks require a higher saddle height in order to get a full leg extension.  That means your body as a whole is higher during seated pedal-climbing, but its really not a big deal.  It does mean that the bigger travel seat droppers start to become more necessary.  And secondly, it can make your knees feel a bit odd after long rides.  I don’t fully know why, but it just feels like being in an airoplane seat if you don’t stop and bend your knees fully every now and then.  I think it’s made worse sometimes when I’ve been climbing over particulalrly difficult terrarin with the saddle at half extension – just to get my body lower and ease my balance.

So overall I’m a convert and I don’t plan on refitting the standard-length cranks.  I don’t think I’m the only person either.  I’ve noticed that manufacturuers are starting to spec 160mm cranks on new bikes.  Possibly even more telling is that Bosch have also added a software update for running short cranks.  It’s optional and easily removeable with the Bosch diagnostics kit.  As for what it actually changes, I don’t know the exact numerical differences, but from the feeling in the pedals and how the bike delivers power, I’d say it simply lowers the amount of rider input necessary for the motor to deliver its full payload.  You still only get 75Nm and 600-ish Watts at max output, but it feels easier to get the motor to deliver that.  I’d say that the cadence speed to power delivery remains about the same – I think to change this would require more than a simple software update. 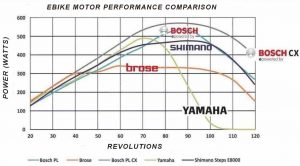 I’d even consider trying shorter still cranks, maybe even 120 or 100mm cranks should they become available.  This could even allow an eBike’s geometry to feature abnormally lower bottom bracket heights – which is generally understood to lower the height of weight (or “centre of gravity”) and make the bike more dynamic, easier to balance and manoeuvre.

I think it’s going to be interesting to look at many other areas of the eBike that have been inherrited from the standard bicycle – what else can be changed and improved?  I think I’ve said in a previous blog entry that eBike development is still in its infancy.  Given 10 years, I think eBikes will look drastically different to their normal bike counterparts.  A few obvious changes to come are tyres, saddles and transmission – all of which need a hollistic redesign for eBikes.