Odd title, I know.  And I guess it’s not even one that might initially pique your interest, but the more general point I’m alluding to is eBike geometry….

The bicycle is well over 100 years old now and it’s fair to say it’s been through many, many iterations and experimentation, including some pretty extreme niche cases, but in general it has steadily evolved over the years.  In more recently years the biggest technological advancements have been in construction materials and techniques, making bikes lighter, stiffer etc.  In the various genres, a bicycle’s geometry has often been seen as a far lesser important component.  We’re so far down the line with bicycles, that I think a lot of people assume that we’ve been through the experimental phases and surely now we must be getting close to the perfect geometry.  I think to some degree this has some truth in road and commuter based bikes.  They’ve existed the longest and roads haven’t changed significantly.  There’s also been some amount of limitation to road bike’s  geometry imposed by the UCI (Union Cylist International – cycling’s overlord governing body). 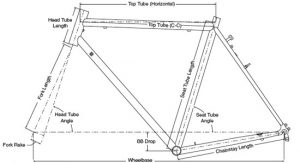 An area where the final perfect geometry is far less known is mountain bikes.  It’s even true to say that historically, MTB geometry hasn’t been a big consideration of manufacturer’s or consumers.  The large brand’s marketing machines have preferred to push new suspension designs, frame materials and often simply the paint scheme or drive-chain specification.  That was until around 8-10 or so years ago when the development of MTB frames got to the more flatter curve of what’s possible with available technologies – nowadays you could even say it’s plateaued.  Bikes aren’t getting significantly lighter, stiffer, faster, and more efficient purely based on how they’re made.   I guess it’s like any bubble – it grows for a while, but inevitably bursts at some stage.  This caused a dramatic slow-down of new whole-bike sales.  A trend began to emerge where consumers would renew their worn transmission and tyres, but stay with their frame and fork much longer – because the “new” versions weren’t as radically better year on year, like they used to be.  The cycle industry’s initial reaction to this was good – it powered a rush of development into components instead of the frames.  Suspension, dropper posts, brakes and tyres all came on a lot in a seemingly more accelerated way.  But it left the big frame brands ultimately, frustrated.  “How can we force new whole-bike sales?”  they shouted in boardroom meetings!  Well, I believe that’s where 29ers came frame….. And what d’you do when that bubble bursts?  Well, change the axle and other standards to make older components obsolete – and recently I think this has caused contempt for manufacturers from consumers.  The veil of apparent honesty and care for the consumer had been exposed as bull**it, instead replaced by a much colder version of reality.  Well this is capitalism – get over it.  Brand’s, just like banks only care about growth and profit – without which, they plunder.

Aaaanyway, without wanting to digress too much, a much brighter reason to buy new MTB frames is starting to emerge: geometry.  The big brands have now (finally) started to experiment with properly different and better geometry.
I suspect a similar sequence of events probably also happened to road bikes in the past – but I was only born in 1980, and I don’t know a huge amount about the history of road bicycles.

So how does this affect eBikes?  Well, eBikes are still in their infancy as a genre at all, with the eMTB genre being younger still.  eMTB’s have only really existed for about 5 years.  Many of the early eMTB’s were either bodged normal bikes with heavy wheel motors or eMTB’s that went straight from drawing board to production and shop floor, without any testing at all, such was the rush to get them to market.  The outcome of this is that eMTB’s (even now), are still seen as an iteration of the normal bike version.  Many brands produce both an electric and non-electric version of the same bike, so much of the geometry is carried over from the standard versio.  It is this, which I think is currently the biggest short-coming of eMTB’s – their need to resemble the geometry of standard MTB’s.  The biggest example of this is in chain-stay length – see, I got to the title point eventually!

There is a trend at the moment for MTB’s to have very short chain-stays.  I’m not expressing my own opinion towards this, but it is generally accepted that short chain-stay on an MTB can create a more “playful” bike that is easier to turn, pop and generally mess around on – it makes a bike have desirable handling characteristics at slower speeds.  Short chain-stays certainly make it easier to wheelie a bike!

Like any number on the geometry chart, there are always downsides to chasing a lower or higher one.  In basic terms (and this is a huge generalisation) when you extend or decrease a geo-number the bike will go better/worse when riding uphill and create an opposite effect when going down hill.  The truth is more complicated than that, but you can at least get the idea that to affect one area positively, there is usually a compromise somewhere else.
In the case of short chain-stays, as mentioned they can create some positives, but some of the downsides can be to make the bike less stable at speed going downhill and also that with a riders weight closer to the rear wheel pivot point – ie the axle – it can lead to the bike tipping over backwards when climbing steep/technical trails uphill, also known as “looping out”.

This is exactly where the difference of eMTBs to standard MTBs is prevalent – but so often overlooked.  So much of an eMTB’s pleasure and advantage is in their ability to power up the hills – if you put short chain-stay on them, all of this is lost.  It’s a common oversight, because mountain bikers would normally assume that short chain-stays should be so desirable.  A recent example of this is Rocky Mountain’s new Altitude Powerplay eMTB.  RM were so keen to develop an eMTB with short chainstays that they had to make their own motor – because most other eBike motors won’t allow short chain-stays due to clearance issues.  It was their biggest hurdle to conquer – and they’ve managed it.  The Powerplay has 425mm chain-stays.  That is MEGA short for a 27.5″ wheeled bike, even a non-electric bike would struggle to achieve CT’s that short.
Sadly as you can read in this review of the bike on Pinkbike, these short CT’s are unfortunately the bike’s biggest weakness – because it makes the bike rubbish at climbing.  Extract:

“The downsides of the Powerplay’s trail bike geometry are its very short, 426mm chainstays and the slack, by modern standards, seat angle. Both make for a wheelie machine when ascending, which leads to extra fatigue on climbs as the rider must constantly battle to keep the front end down. Luckily I have good hip flexibility, but many riders suffer here and will struggle to keep the front wheel on track and the bike on-line. It is easy to float the front wheel over obstacles, but much more easy to start to loop out or simply stray off the track. The light front wheel can be remedied slightly by using the Ride-9 adjustment chip on the shock linkage, but there are some disadvantages, namely, lifting the rear of the bike and steepening the steering geometry. The difficulty found in climbing this bike is trail based, if you want to shuttle yourself up a road to pin the downhills, then what I’m describing here is almost a moot point, but climbing and descending challenging trails is where the eMTB fun begins.” – Pinkbike.

And this is a conclusion also well exemplified in the other direct by the KTM Kapoho LT (that I have on test at the moment and will publish my thoughts of soon).  The KTM has enormous chainstays, just shy of 500mm.  If you’re a mountain biker who is aware of modern geometry trends, this number would utterly terrify you.  For many, seeing that number alone would mean a definite “no thanks” before they ever lifted a leg over the bike to try it, because that would just be terrible to ride, right?  Well they’d be wrong.  The KTM’s big CT’s are character defining and possibly it’s biggest strength.  They make a bike capable of climbing literally ANY technical ascent (coupled with the large tyre’s unflichable traction).

For me, I do think the KTM is a little too far along the scale of chainstay length and it does slightly detract from the bike’s downhill handling, but my point over all, of this blog entry, is – that eBikes should not be thought of simply as a normal bike that gets to the top of the hill for you.  To think that is missing the point; you’ll miss all the fun you can have effortlessly sailing uphills; you may also end up being disappointed by eMTBs if all you’re hoping for is a self-propelled bike.  eBikes should be thought of in their own right – they are not simply bicycles that pedal themselves.

2 thoughts on “The Chainstay…”