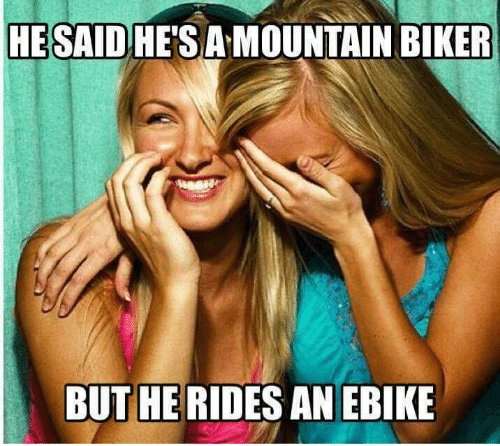 A pragmatic approach blog entry, to answering some of the eBike haters comments and concerns.  eBikes and especially eMTB’s are still causing quite a lot of negative reaction, but is it fair or justified?
….so, I’m going to start by splitting the hater comments into 2 distinct categories:
Firstly, there’s the reactionary to anything new being “gahh, just take it away, make it stop” etc.  These tend to be not-entirely-logical, Daily Mail, pitchfork waving people.  I’m going to call this category “New is bad“.
And secondly there are many people who have real concerns.  These I’m going to call “Genuinely concerned“.

Its cheating.
Let’s start with the google dictionary definition of cheating.
“to act dishonestly or unfairly in order to gain an advantage“.  Well, in this respect I can, kind of, a little bit, understand.  I mean, eBike motors are close to silent these days and more and more are trying to hide the battery inside the frame, making an eBike look very much like a normal bicycle (with varying degrees of success).  But I’m not exactly sure that’s being dishonest?  Electric motors are quiet, just because they are, not really by specific design.  Plus, you’d put batteries inside a frame for the same reason we put cables inside the frame – it just looks way neater.
And the other definitions don’t really apply.  You can’t “cheat” on your wife with an eBike.  Well, not in the traditional sense anyway.
If it isn’t a race, then how are you cheating?
I think what is really meant by “cheat” is the more obvious lack of effort required to ride an eBike, therefore you’re cheating yourself of the health benefits of riding a bike.  But what if health benefits aren’t your main intention?  What if the main reason you ride is to have fun, take in the views, get some country air or more practical reasons like to get to the shops or commute to work?  Or even rehabilition reasons, like a hip replacement etc.
I understand that people can feel a bit annoyed that their ride was aforded to them by a ton of hard work.  Not just on that ride, but on all the other rides that built up enough fitness to go on that ride.  The time, the effort, the sweat, the panting, the suffering, even the equipment, the clothing, the hyration pack, the really expensive breathable waterproof – you don’t need any of that to ride an eBike.  I can see how people find that annoying…… mmmmmm, but it’s still nonsense.  I mean, I bet there were plenty of horse guys that were pretty annoyed when Henry Ford started producing his horseless-cart.  Do we remember them with empathy and understanding?  No, we don’t remember them at all.

It’s a motorised bicycle, therefore a Motor-bike.  Why should they be allowed the same rules and reg’s as bicycles?
It seems to have taken about 40 years too long, but we finally seem to have realised, as a global society, that bicycles = good.  They help to solve 2 huge problems we have on planet Earth, (plus others) those being a huge population of obese people; and terrible air quality due to a tranport system that is reliant on burning fossil fuels.  So any way of reducing combustion engine journeys has to be a good one, right?  This is why eBikes are regulated under the same laws and rules as bicycles.  Because we absolutely must get away from car journeys.
Putting eBikes under the same banner as bicycles helps them become the accepted norm, whether they be ridden on or off road.

And let’s not forget that all of the obove “new is bad” comments can all be answered with – “It’s no one’s business what I choose to buy or ride, as long as it’s legal and not anti-social”.

Cycle access worries
At present, there is no UK trail centre, national park, council, postcode or private cycle network which deferentiates between eBike and Bike usage.  Ie anywhere you can ride a normal bike, you can ride an eBike – as far as I’m aware.  In fact, many trail centres encourage eBikes and the new trail users that bring them.  Just like normal-bike riders, they bring their wallet, buy cake and coffee in the cafes, put money in the parking meters and don’t reach higher max speeds than normal-bike riders.  It is a worry that more cyclists of any kind bring additional burden on resources, additional wear on the trails and increase risk of incidents simply by increasing the volume.  But guess what, we all have the same rights to access.  Just because more people are able to utilise that access doesn’t mean it’s unfair.

In Europe we have huge access to the countryside.  In the UK a lot of our access rights  to the countryside can be traced back to the 1932 “Kinder Scout 80: Mass Tresspass” http://www.kindertrespass.com/  Have a look here or on Wikipedia if you’re interested, but basically it opened up the British countryside to hikers on footpaths and byways etc.   The 1980’s brought us mountain bikes, which as “non-motorised vehicles” are allowed on byways, bridleways, cycle paths, disused railways and oddly enough, footpaths (although the common misconception is that mtbs are banned from footpaths – technically, they’re not entirely, but it gets complicated).
Conversly to all this lovely countryside access we have here, over in the “land of the free” in America, their access rights are drastically limited.  There is no “right to roam” or equivalent.  In terms of countryside access, they are anything but “free”.  Access for MTB’s there is terrible and seems to be getting more restricted, not less, because the American version of “free” usually means “free to those that can afford it“.
So when you see comments online about eBikes worsening the problem for access, a huge amount of these originate from the US.  And I think from their point of view, it’s a lot more understandable.  It’s already a very sensitive subject, so I can see why adding eBikes to the problem fills them with dread.  I do understand that.  I think a lot of the access fears originate in this way from the US.

Trail errosion
Mountain bike trail erosion has been discussed for as long as MTB’s have existed.  After a quick scan through Google there seems to be plenty of evidence either way as to whether MTB’s cause more trail erosion than horses or walkers.  Within that topic, there now comes the question of whether eMTB’s cause more or less trail erosion than standard MTB’s.  For this more specific topic, there is much less evidence either way.  What I’d say from my own experience, is that riding an eMTB involves much less pulsed pedal inputs and the power is delivered in a much smoother way, so the theory is that this would reduce trail erosion

If eBikes become the norm, future generations will grow up having never ridden a normal bike.  This is counter productive to the obesity argument.
This is probably one of the few (maybe only?) argument I struggle to disagree with.  I’ve even noticed my own belly start to increase in size during times of higher frequency useage of eBike use and as a fairly commited, lifetime cyclist I do think that at times, it has made me lazy.  I’d also say the the majority of eBike users I’ve seen on the roads and trails aren’t the normal slim cyclist physique.
But, well it’s just unavoidable.  Not having to invest such a huge chunk of time into the fitness is a double edged-sword.  Most of me just ends up thinking – I don’t care, this is so much fun.  But maybe I’ll regret that when I’m 70?

Looking at things with a little perspective, I really think that the amount of online negitivity towards eBikes has drastically subsided in the past 12 months and I expect this trend to continue – but there is a long way to go before eBikes have true acceptance.  Plus I guess there will always be those hardcore internet trolls that just love to shout down their keyboard if they think it will cause a reaction.
I certainly think that the legality of de-restricted eBikes will play a large part in the public’s attitude towards eBikes as a whole.  Even though they should be categorised differently – in general, they won’t be.  Just like the recent case of a pedestrian death caused by an illegal bicycle, no-one remembers the technicality of the bike lacking any brakes – people will simply remember that a cyclist killed a pedestrian and was then a dick about it – I think this story could so easily have been an illegal eBike, instead of an illegal bicycle and it would do terrible damage to the overall image of eBikes.  I’d even go so far as to say something like this, whether more or less serious, is almost an eventuality not a possibility.