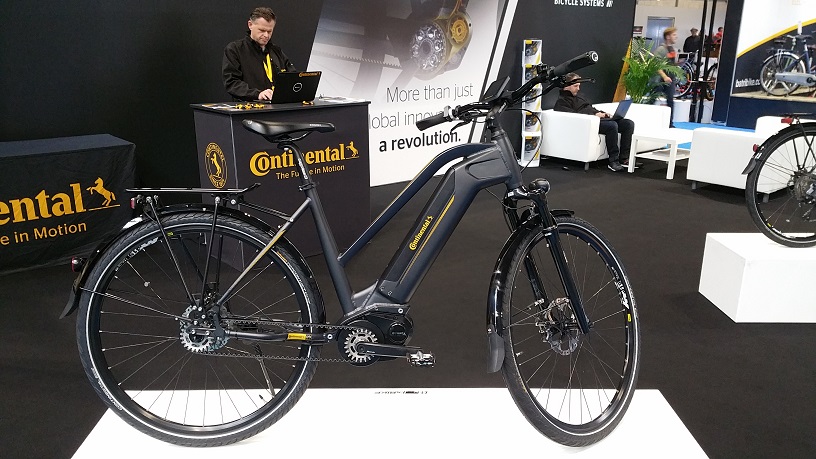 I knew about the huge car and bicycle tyre divisions of Continental, but I must confess that I was completely unaware that they also manufacture many other car and electrical parts including turbos and looming.  In fact, it turns out that Conti’ have R&D departments in all kinds of things…..

So my ignorance met with quite a shock to hear that Conti’ had not only got an eBike drive in the pipeline, but it’s actually pretty close to large-scale production manufacture, with early units hitting German shop floors within this calendar year.  Although I don’t know which frame brands will be using them as OEM spec’, I suspect it will not be a small minority.  Conti is a huge company and I doubt this is a “toe in the water” type roll out.

So I went to the Birmingham NEC Cycle Show to see for myself and again to my surprise, they even had a few test mules. 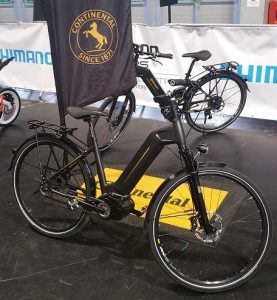 What I know so far….

As for technical data, there’s most of the tech-spec on the Conti’ website here, so I won’t copy/paste it in.  The big news, and I mean REALLY BIG news is – this will be the first large scale production of an eBike motor with a self-contained gearbox. I’ve been utterly dumbfounded as to the absence of this concept for literally 10 years.  It seems SO obvious!  I really don’t understand why it’s taken until late 2017 for someone to bring a geared eBike motor to market.  I know Shimano have something similar in development, but as far as I’m aware, that still only makes 2 brands – and you can be sure Shimano will take their sweet time to bring theirs out, as is normally the case with Shimano. 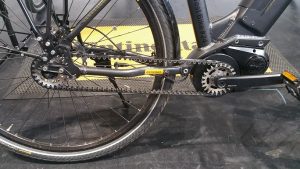 It solves so many of eBikes current problems.  It centralises the weight; reduces unsprung weight on suspension frames; keeps all the mud out; and generally just seems a much better idea to integrate the gearbox and motor into a single unit.  It’s also a significant step away from parts borrowed/adapted from bicycles – and to me, this is the important bit.  Current bicycle transmission is designed to transfer around 100 Watts of power for most the time, with normal human output peaks (ie not Sir Chris Hoy) of around 500 Watts.  eBikes, which remember are combined with human efforts, transfer roughly 3 to 4 times these values – it’s just way beyond what a normal bicycle chain and chainring can withstand for long periods.  Imagine making your 150 horsepower VW Passat into a 600 horsepower beast – how long would that transmission system last?  I’m guessing, not very long at all!

I know from my own experience that eMTBs when used in extreme terrain (eg the Peak District!) can stretch a chain within litterally less than 100 miles.  That’s about 4 average rides.

I guess the other, not so big news, is that the Conti’ eBike uses a Nuvinci gearbox and a belt drive.  The quickest way to explain this “Continuously Variable Transmission” system is simply to watch this short video.  In simple terms, it’s kind of like cone gears – there is no break between gear shifts and its effectively infinitely indexed, so the drive doesn’t need to let up at all during shifts.  The only reason I say this isn’t massive news is that Nuvinci have had these hub enclosed gearboxes for quite a few years now, so the technology itself isn’t new – just its application.  Likewise the beltdrive isn’t a new idea.

So – the test ride

The NEC Cycle Show eBike test ground was hardly much of a challenge for the bike, but it had a short slope to climb and I was able to gain at least a basic feel for things.  And overall I found it very impressive.  In use, it’s not actually very different to other general experience of eBikes.  I’ve ridden countless eBikes, including those fitted with Nuvinci hubs before, but it was good to see that there wasn’t anything odd or awkward feeling – it just felt like a fairly standard Bosch Performance motor.  I wasn’t really able to get a feel for power delivery or peak output. 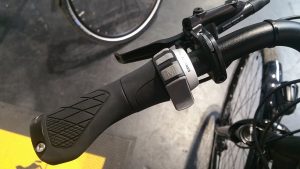 Conti’ only had a few eBikes on show, and weren’t able to include a full suspension eMTB that had the integrated gearbox.  I think in the long run, this should be one of the best applications of the system.  A system isolated from mud ingress and also with an extremely lightweight rear wheel will surely make a killer combo for offroad riding and personally I can’t wait to try one in real-world conditions!