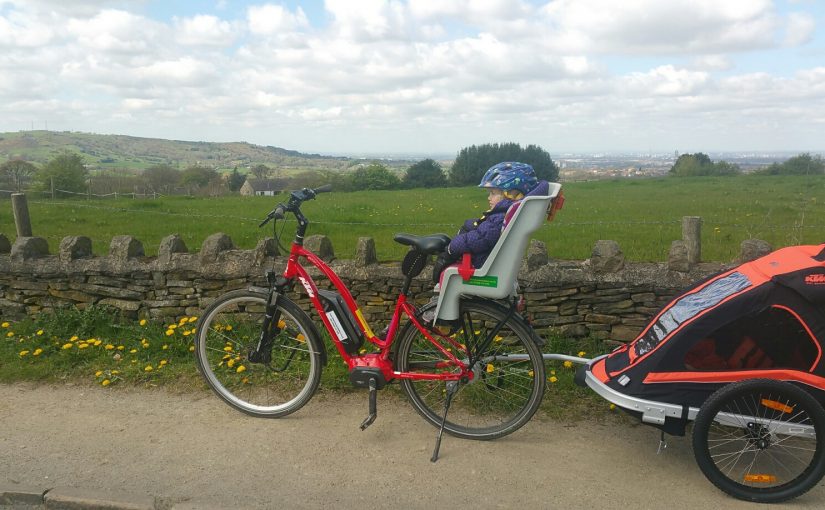 Shimano introduced the original STePS system around 4 years ago, but realistically, bikes with it were being produced and appeared on shop floors during the 2015 model year.
Last year I spent a full 12 months with this red KTM eBike and, unsurprisingly I absolutely loved it.
I originally took reciept of the Vienna in January 2016.  It was my first experience with both the Shimano Steps drive and also the Di2 hub-gear.  All bikes from KTM arrive in a huge box and come 99% assembled, ready to go.  All I had to do was plug the seat post in, turn the handle bars and screw the pedals on, oh and charge the battery of course!  All of which is super basic.  The gears are set up, the brakes alligned and the tyres are inflated.
All bikes from Manchester eBikes do also have a standard PDI check too, just to be sure.
From unboxing many other KTM’s over the years, I knew that their Austrian factory build quality is one of their best strengths.  Everything from the welding quality, paint finish and parts assembly really is second to none.  KTM clearly take great pride in their work and it shows.

Sizing and fit.
The frame size on this bike is a 46cm.  It’s the smallest available for the Vienna and only a few other KTM eBikes have the option of smaller frames, all of which have smaller wheels than the Vienna’s 700c’s.  Now I’m 6’2″ and KTM’s sizing chart suggests I would best fit a 56cm, a whole 2 sizes bigger than the 46, so you may think this is an odd choice.  Well the reasons are simple: my wife has to be able to ride it (she’s 5’6″) and the smaller sizes are always much more useful for demonstration purposes.  However, I’ve ridden other 46cm eBikes before and know that, because the power comes from a motor, not really one’s legs, you can comfortably ride a much smaller bike than you might normally choose otherwise.  The 46 has been fine for me all year.  I’d advise the same to others too really – if you’re at all in doubt about size (for a hybrid type eBike), go smaller.

The Shimano STePS drive
The Steps drive on the Vienna is European and UK legal, giving 250W nominal power; assisted pedalling upto 25kph (about 16mph); and 50Nm of torque at maximum assistance.
It has 4 assist modes (zero, eco, normal, high) and although 50Nm of pull is plenty for the bike’s intended use, I did tend to leave it in ‘high’ for the vast majority of time.  Maybe I’m lazy?  But you just get used to the bike doing the work!

Battery capacity / range
The Vienna’s battery is a 400W/hr unit.  How far you get from a single charge obviously depends how much you use the juice.  In real terms, a full charge is enough for as much cycling as you’d want to do in a single day.  I never got less than 20 hilly miles per charge, but in the Peak District, I never got the 50+ miles the catalogue indicated.  One point I would make though is that most journeys don’t start on 100% battery, so I did run out of juice a few times over the last 12 months.  The problem is having a regular run, like my child-nursery run, which used about 15% of a charge each time, so it doesn’t really seem necessary to charge it, knowing there’s 85% remaining.  The problem comes, when I’d done a couple of these and then wanted to do a 35 mile journey the following day.  This is just a habit or planning issue though and wouldn’t be solved by having a bigger capacity.

Components
Everything is there from the start and fit for purpose.  The Vienna comes with really bright front and rear lights – easily bright enough to light up green lanes in the pitch black night; a sturdy kick stand; the mudgaurds are integrated with the pannier rack which makes them both very sturdy – hence the addition of a child’s seat, which I never felt nervous about; and a chain guard.  No upgrades were necessary (apart from said childseat I guess).  It’s worth noting that the lights run from the main battery and require a pretty insignificant amount of power, so I ran them pretty much all the time – I just thought why wouldn’t I?
A small mention should also go to the extremely adjustable stem, which I set to maximum height and shortest reach giving the bike a super relaxed position for the rider.
I must admit to being a touch sceptical about the Nexus Di2 8 speed gear hub.  I was worried about the gear range being wide enough and didn’t really see the point of having electrically shifting gears (as opposed to cable).  The range is decent and the top gear (8th) is perfect for flat cruising at maximum assist speed, but I live in the Peak District and because some of the B lanes are extremely steep, I did occasionally find that 1st gear would struggle with the 1:3 hill gradients.  That’s a seriously steep hill though and I should stress that I never once actually stalled, but I did have to pedal quite hard up these.
The Di2 electric shift was amazing and a real surprize.  It’s digital and therefore never goes out of allignment or miss shifts.  The difficult part to explain is that it only really makes sense when you try it.  Its a fantastic and polished system.  It changes gear much better under pedal strain than the cable equivalent too, because the computer knows you’re changing gear and can tell the motor to momentarily kill the power, just enough for a smooth shift.
It still has limits though and shifting during extreme crank power can lead cause a problem.  It was always quickly remedied by a brief pause in pedalling, but this can occasionally be annoying.  So it’s easier to negate the issue all together by always doing a brief pause during gear-shifts while pedalling hard.  It isn’t a problem at all for most riding conditions.  The only function of the Di2 shifting I never really used was the Auto-shift function.  I just think I’m too much of a control freak – I want to choose the gear I’m in, because I can see what’s coming up ahead – a computer can’t.

Issues and niggles
There’s nothing major to report really, but I do have a few recommendations to the factory – so it’s handy that I know the head of R&D at KTM Bikes.

Summary
It looks like a rather long list of niggles above, but really they are all very minor.  Overall this has been a fantastic product which has genuinely improved mine and my family’s lives.  We’ve done countless family rides (obviously using another eBike as well), shopping trips and general shortish journeys.  At the start of the year I vowed that I really wanted both myself and my wife to try as hard as possible to stop all sub-5-mile car journeys, instead using this KTM eBike and I really think that we’ve made significant impact on those journeys.  If I were to put a figure on it, I’d say we’ve managed to cut out a good 70% of sub-5-mile car journeys and enjoyed every minute of doing so.  The lack of required maintenance has really aided the bike’s readiness to just get on with it.  Other than changing the brake pads and 2 chains (due to wear, they never snapped) the only maintenance the Vienna recieved is a rare wash.
eBike rides are effortless adventures that are invigerating and eye opening.